The 2009 ASHA Board of Directors and  Lemke and Dublinske prepared a document – Designing ASHA’s Future: Trends for the Association and the Professions – for the SLP profession. One of the future “trends” I was most interested in related to Generation Y, or the Millennial generation (born between 1982 and 2002).

In 2011, ASHA surveyed the professions’ impression of Generation Y with the question “What has your experience with members of generation Y led you to believe about their future involvement in Association volunteer roles compared to that of other generations?” (ASHA, 2011).  Most respondents, 68%, agreed it would be more challenging to engage this group of individuals; however, the article compared the results to a 2007 survey which showed:

“Respondents reported the generation  to believe more strongly in the importance of volunteering…[the challenge] will be in finding meaningful and substantive ways to involve these less experienced but eager young professionals” (p. 4).

So what was the consensus solution to address the issue?  ASHA’s strategic objectives to address future issues included:

END_OF_DOCUMENT_TOKEN_TO_BE_REPLACED

This isn’t a post with answers. This is a post with questions. Questions to add to the already mounting questions other SLP Graduate school hopefuls have after filling out an avalanche of applications.

People applying to SLP Graduate Programs across the country have to do the following, in general:

END_OF_DOCUMENT_TOKEN_TO_BE_REPLACED

In the January 2014 publication of the ASHA Leader, there was  a post entitled “Student’s Say: Craft a Stand-Out Application” As far as my Google search of “ASHA + SLP grad school applications” took me, this is one of the first of it’s kind for ASHA. I’ve been blogging about these same issues for over 2 years. Giving similar hints, tips, and advice the author, Carol Polovoy, offered up.

What I particularly appreciate about this post is that she was able to interview and get recent statistics from SLP grad schools. For instance,   she reported “Montclair (N.J.) State University, for example, received 541 speech-language pathology program applications and accepted 38 (7 percent) for the 2011–2012 year.” 7%!!!!??? Woah. That’s depressing. But then she followed with another recent statistic, saying  “The University of Pittsburgh…received 339 applications for 2011– 2012, and offered admission to 94 (27.7 percent).” 27.7% is WAY better than 7%.

I’ve never claimed to be an expert, but in 2012 I wrote a post on the chances of getting admitted into an SLP graduate school. I collected my numbers from the Council of Academic Programs in Communication Sciences and Disorders (CAPCSD). I’ve also written several other posts – here and here and here and here  – about the application process. It’s now 2014. The process has only gotten tougher and more competitive. People are interested in the field of Speech-Language Pathology. Applicants are frustrated, tired, and worn down by the process of applying and the potential rejection.

ASHA, I appreciate the post and the thoroughness the author went through to get the information. Now…what’s next? Are there any more posts planned on this topic? Because there are so many questions from students. They need answers, and not from me. My blog is only popular because these issues aren’t being addressed elsewhere. I hope ASHA has more posts like this.. real, heart felt, and research based.

I can’t be the only one blabbering on about the SLP grad school trenches. Let’s see what happens.

So what’s been happenin’ in yalls neck o’ the woods? (as we say in the South) I’ve been busy with my new part-time medical internship at the hospital where I live. Loving the hospital setting, doing modified barium swallow studies (MBSSs), and seeing clients for both in-patient and out-patient rehabilitation and assessment. But, I digress…

Before the internet or even in the early 2000s, you had to read the ASHA leader, attend conventions, or call/write/telegram an SLP or AUD friend to find out the latest news. When Twitter launched in 2006, I distinctly remember saying, ” I will never use Twitter; that is for hipsters.”

Well here I am in 2012, using Twitter, and using it daily. Don’t judge me; if anything, you should join the ranks. I mentioned in a previous post  the common practice is to Google therapy ideas to supplement Evidence Based Practice. Well in order for Google to answer these requests, there must be someone to post the answer first. Other, more experienced SLPs have begun answering questions and posting ideas for others to find, such as: @SLPTanya , @Azspeechguy , @speechtechie , @apujo5 , @Speechreka , @ActivityTailor , @mtmarySLP , and many, many more.

END_OF_DOCUMENT_TOKEN_TO_BE_REPLACED 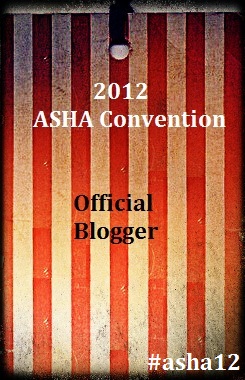 I was quite excited to learn I was chosen to be 1 of 3 official 2012 ASHA Convention Bloggers. The details of the selection process are a mystery to me but I like to imagine I was chosen because they heard of my newbie (semi-awesome) blog, my excitement to join the profession, and my ever-so-amateur photos I post on here as well. Or perhaps it is because there is a lack of blogs written by SLPs or student SLPs in the great state of Georgia, which just so happens to be hosting the convention. I tend to think it’s more the latter, but no matter the reason, here is where I string together letters and words to form what is my blog.

END_OF_DOCUMENT_TOKEN_TO_BE_REPLACED

Have you ever thought ASHA was similar to the great Wizard of Oz? I gathered my thoughts, and I have found I enjoy a great many quotes quite relevant to my life:

“Back where I come from, we have universities, seats of great learning, where men go to become great thinkers. And when they come out, they think deep thoughts and with no more brains than you have. But they have one thing you haven’t got: a diploma.”

“Back where I come from there are men who do nothing all day but good deeds. They are called phila… er, phila… er, yes, er, Good Deed Doers.”

“Pay no attention to that man behind the curtain!” 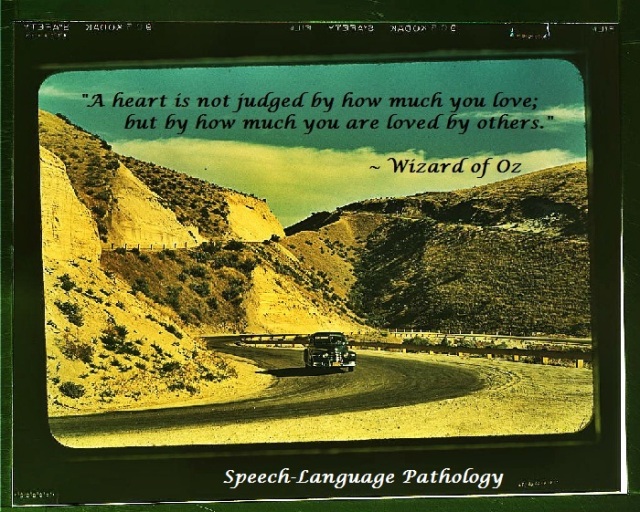 END_OF_DOCUMENT_TOKEN_TO_BE_REPLACED

As a part of NSSLHA and our Advocacy aspect as Speech-Language Pathologists, we are encouraged and happy to spread information about our profession. Personally, I want more people to know how an SLP can help in more than just one or two aspects of the field. While every profession – nursing, PT, OT, respiratory, teachers – has its place among the disciplines, I am focused on how SLPs can impact more and more people.

A great way to spread the word about our profession and skill-set is to piggy-back off of Nationally recognized “Awareness Months” with an SLP twist. So,if you are looking for a way to stretch our services or reach new clients, may I suggest one of the following:

END_OF_DOCUMENT_TOKEN_TO_BE_REPLACED

Alaskan Speech-Language Pathologist (CCC-SLP) who transitioned from schools to specialty private practice. Want to email me? Use the contact form on my “About Me” page.

Starting a Clinical Fellowship as an SLP: Read More

This work is licensed under a Creative Commons Attribution-NonCommercial-NoDerivs 3.0 Unported License.

What are you looking for?